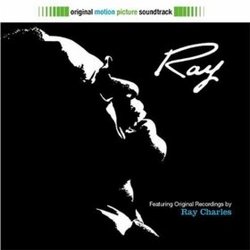 Ray Charles. 13 Grammys. The only artist to have top 10 hits in five different categories (Jazz, Rick N' Roll, Pop, Rhythm and Blues, Country & Western). I won't go deep into what made this man a genius and visionary both as a musician and as a businessman. Too many biographies have done that already. Since 1988, Director Taylor Hackford worked with Charles personally to make a biographical movie about him, trying to clarify the context and meaning behind Charles' music and how it related to his tumultuous life.

The songs in the movie (and on this album) were personally picks by Hackford (and approved by Charles) to tell the story of Charles' life. This isn't some sanctimonious tribute to a legendary person, but a living, breathing love letter to man who permanently changed the face of popular music. Actor Jamie Foxx was tested and approved by Charles himself and the real special effect of the movie is that when Foxx plays the piano, you believe it is him performing the songs live at that moment.

The easy response is that is a "best-of" collection to appeal to the average fan and true for many, this may be their first real introduction to the man's work. I will say that if you have these albums (The Genius Sings the Blues, Genius hits the Road, The, Ray Charles (Hallelujah I Love Her So), Modern Sounds in Country and Western Music, Ray Charles Live in Concert and Ray Charles Live in Japan ), then you pretty much already have the songs. However many tracks for the album were pulled from Charles' personal recording archives, so they all sound clean and crisp. Tthere's plenty of Greatest Hits numbers here ("Hit the Road Jack", "Bye Bye Love", "Mary Ann"), but the album is nicely organized, with plenty of live performances ("Let the Good Times Roll", "What'd I Say") mixed in.
There's so many great numbers here, picking out favorites. There's literally not a single weak track on this disk.

The only thing I can hold against this album is that it should have been combined with More Music from Ray, to make a complete soundtrack release. For those that don't already have this music, grab this album. Because after seeing the film, you will not be able to get them out of your head.