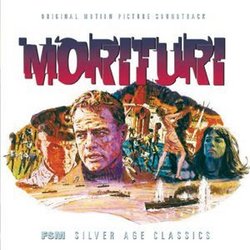 Any fan of anything has to walk the fine line between cheering their heroes as they grow in surprising new directions and wanting to keep them in the same box they were in when they first fell in love with them. It reminds me of when Jerry Goldsmith's score for the 1992 comedy Mr. Baseball first hit store shelves. Certain fans, often those claiming to be his most "devoted", heralded Goldsmith's goofy, trivial synth effort as some sort of beginning-of-the-end for the Maestro. Since then, they've claimed that the orchestral alchemist responsible for so many avant-garde scores of the 60's and 70's had grown tired and soft. Honestly, it's no wonder Jerry is continually annoyed with so many of us.

But for what it is worth, those particular fans are probably going to go nuts for Film Score Monthly's release of Goldsmith's dark and brooding score to the 1965 World War II submarine thriller Morituri. And yes, to a certain extent, the pony tailed one doesn't make 'em like this much anymore. (It's all apples and oranges to me, frankly. Because of my age, I'm largely an 80's Goldsmith child. Give me The Secret Of Nimh or Explorers any day of the week and I am a happy camper.) While I'd surely call myself an adventurous listener, in general I tend to find a lot of Goldsmith's earlier works to be on the harsh side. Call it blasphemy, but to me Planet Of The Apes is a technically impressive masterwork that rarely sees the inside of my CD player. Such are a lot of my feelings about Morituri, a generally claustrophobic, hunting and sneaking around kind of score whose forty minute run time nearly tested my patience.

"Main Title" introduces the lonely principal theme, an anthem disguised in a performance for solo zither (insert your own conjecture about the influence of Anton Karas' The Third Man here) and the ominously spare beating of a hollow drum. It's both ambivalent and unsettling, presaging lot of the rest of the score. The cue then moves forward more traditionally into an intricate Asian motif for plucked strings and orchestra. "Assignment In Macao" and later cues like "The Prisoners" feature the kind of writing that would get much more play in Jerry Goldsmith's later Alien, and cues like "Bon Voyage / Hot Wire" pull out Goldsmith's best ticking-rhythm suspense licks.

Then there is the stuff the Goldsmith fans really want—the old-school action. "Boat Drill" features alarming brass work and a sinister piano ostinato. There are snatches of a bold theme that is consistently stymied by the atonal material. "Change Of Fate / Sneak Attack" puts the traditional arrangement of the "Theme For Morituri" boldly on it's feet and closely mirrors the kind of percussive anarchy and atonal textures that would later surface in First Blood. "Traffic Jam" is an album highlight, with yet another building ostinato that suddenly goes excitingly scherzo. More of that follows with cues such as "Breakout" and "Abandon Ship". The strings here are harsh and slicing, and sound a lot like the atmospheric rattlings of other Jerry Goldsmith classics like Twilight Zone: The Movie (which is to say they sound a lot like Stravinsky).

"End Title" brings back the zither again, joined by a melodic and melancholy full orchestra. After the last track, FSM has also included a tiny hidden curio, a solo humming voice that could very well belong to lead actor Marlon Brando.

Rounding out the rest of this disc is David Shire's sixteen minute configuration of his score to the 1976 true-life hijacking drama Raid On Entebbe. I'm not going anywhere near the subject matter of the film right now, what with all that is happening in the world. (Let's just say it's still, ahem, relevant.) "The Hijacking" begins with light, non-occidental wallpaper music for accordion and a small ensemble that literally crossfades into the kind of low suspense writing that helps you understand exactly why FSM paired these two titles together on the same disc. "The Imprisonment" features a Semitic violin wailing away over more of the same.

But the next cue, "The Raid," is the best one of the whole disc, a fiery and brassy piece of action scoring with a kickin' ostinato and a rousing theme to boot. If there's really only one reason to have this album, it's this stuff right here, representing Shire at his very exciting best and harkening to the energy of his groundbreaking Taking Of Pelham One-Two-Three. The hour long disc rounds out with "The Return", a warm elegy that crosscuts to a male choral rendition of the ennobling "Shevet Ac'heem" over another reprise of the exciting action material.

In all, Jerry Goldsmith fans should know very well what they're getting themselves into here. No gigantic themes, and nothing terribly hummable. This is a true film score, a purely functional piece of music that can feel a little naked without the movie in question. And while not exactly "for bottlecap collectors only", there is a lot of nuance to Morituri that may not be appreciated by every casual listener (myself included). But simply everyone should take note and consider picking this up for David Shire's brief but invigorating contribution to FSM's wonderfully packaged disc.