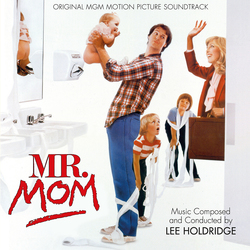 Quartet Records and MGM proudly present the world premiere release of the original score to the 1983 family comedy Mr. Mom, composed by Lee Holdridge. Written by John Hughes, the hit film tells the story of a recently unemployed Detroit automotive engineer (played by Michael Keaton), who becomes a stay-at-home dad while his wife (Teri Garr) returns to a career in the advertising business.

Holdridge's score is a sheer delight, providing a sophisticated component to the film. Descriptive, romantic, funny… thirty-seven years after its recording, it's finally being released.