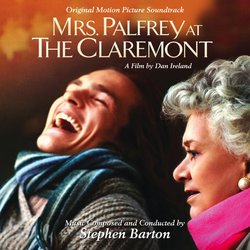 Mrs. Palfrey at the Claremont

Review: Mrs. Palfrey at the Claremont

Up-and-coming composer Stephen Barton has been working at Wavecrest Music with Harry Gregson-Williams for a number of years as an orchestrator and additional composer for such projects as Kingdom of Heaven and Shrek 2. Beginning to take on projects of his own, his first feature film score is for the comedic drama Mrs. Palfrey at the Claremont. The score was recorded with a small orchestra, which gives it a light, quiet sound, and is centered around a piano, with small string and woodwind sections filling out the rest of the score. The album is short and little is developed in terms of a theme, but a couple of motifs can be picked out with careful listens.

While the projects Barton has spent the most time on are epic or thriller scores with Gregson-Williams, he also worked on romantic comedy scores such as Passionada, and Bridget Jones: The Edge of Reason. The overall tone of Mrs. Palfrey at the Claremont follows in these projects\' footsteps and shares the light waltz structure of some of Hans Zimmer\'s romantic scores as well. It is light and warm, while also being playful at the same time, a mix that can be difficult to do right. The best comparison I can draw is probably to some of the more romantic parts of Shrek 2, which Barton worked on.

The opening cue, "Mrs. Palfrey at the Claremont", sets the stage with a slow waltz tempo and a sweeping, yet playful, style. This continues throughout the score with more bouncy, comedic elements, such as in the opening of "In Charge of Cheerfulness" or cues that swing back toward the sweeping, dramatic style. The latter type is best exemplified in one of the better cues on the album, "Autumn at the Claremont". This track introduces one of the minor themes, beginning on piano and adding a solo cello further in. The rest of the chamber orchestra enters later with snippets of the theme. The solo, yet complex piano motifs in this cue remind me of the piano theme from Final Fantasy X in the meandering pattern of the theme. The cello behind it adds a second dimension.

This is a very strong first solo score for Barton, for it shows that he can handle a range of styles and tones on his own. The album is very short and I would have liked to have it developed more, both thematically and in orchestration. Fans of pleasing solo and chamber music should consider this album.