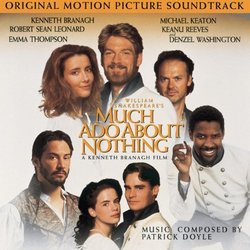 William Shakespeare's Much Ado About Nothing

Review: Much Ado About Nothing

In 1989, two new talents burst onto the international film stage with the release of a new adaptation of William Shakespeare's Henry V.  The first of those was the actor/director playing the title character, Kenneth Branagh, and the second was the film's composer, Patrick Doyle.

Now, Branagh and Doyle are long-time collaborators.  The two worked together for the first time in 1987 when Doyle was commissioned by the Renaissance Theatre Company to write the music for a BBC television production of Twelfth Night.  Following the show's enormous success, Doyle remained with the company composing incidental music for its stage productions.  Although he had been composing for television and stage for over ten years when Branagh asked him to score Henry V, the movie marked Doyle's first foray into film composition.  His atmospheric music, full of dark, rich choral writing and military fanfare, was as successful as the film it accompanied.  Doyle was widely recognized as a new voice in film composition and easily stepped into the professional world of film scoring.

Much Ado About Nothing was the duo's second Shakespearean adaptation and, like most Shakespearean comedies, is a bit confusing.  Ok, more than bit confusing, but a basic understanding of the plot will serve in understanding the choices Doyle made in the score, so here goes.  Set in Renaissance Italy, Much Ado is concerned with the sparks that fly in relationships between the sexes.  Don Pedro, his stepbrother Don John, and two lords, Benedict and Claudio, return to Messina for rest after a wartime victory.  Upon arriving, Claudio finds himself smitten with Hero, daughter of the local governor.  Benedict, a confirmed bachelor, laughs at his young friend's love and commences verbal sparing with Beatrice, Hero's cousin.  Don John, jealous of Don Pedro's close friendship with Claudio, schemes to thwart Hero's marriage to Claudio by convincing the young lord that Hero has been unfaithful.  Meanwhile Don Pedro decides to play a joke on Beatrice and Benedict by twisting their sharp barbs into words of love for each other.  Through ruses, mistaken identities, and misplaced loyalties, everything begins to fall apart only to be saved by a plan in which Hero feigns death, and Don John's treachery is uncovered.  In the end everyone marries and lives happily ever after.  Sound silly?  It is, but also much fun.

Much Ado is bright sunshine to Henry's mud-coated battles.  Likewise, Doyle's score is light and flowing, full of warm, bubbling sounds rather than the dark harshness of his music for Henry V.  He achieved this new sound by throwing over the expansive sound of a full orchestra with brass for an intimate chamber orchestra that instead relies heavily on strings and upper woodwinds and occasional period instruments.  He also scored almost every scene in some manner (resulting in the cues blending into one another on the CD), creating an unending soundscape that defines the setting as much the Tuscan hills.

The movie and score open with "The Picnic", a simple cue in which Emma Thompson, Beatrice to Branagh's Benedict, reads a poem from the play over a simple harmonic progression on arpeggiated guitar, which accompanies the score's main theme on cello.  Doyle obviously enjoys having the actors involved in the score because he uses their voices in three other cues, the first being "Sigh No More Ladies."  In this cue, Doyle himself appears on screen and sings the poem Thompson read at the beginning of the movie to the main theme.  The second and third are choral passages where the assembled actors sing, and unlike some recent musicals, the cast sounds excellent.  In "Pardon Goddess of the Night," the actors chant a funeral dirge for Hero, which eventually becomes a song lifted up by Doyle.  Once the action has been resolved, and everyone married, the crowd again sings, but this time they sing an upbeat version of "Sigh No More" as the credits begin to role.

The movie's first pivotal scene is a costume party where the deceptions begin.  For this scene ("The Masked Ball"), Doyle wrote a short, original dance in the manner of a gigue, which uses period instruments.  The dance works well in the movie but is a bit jarring on the recording since it lasts only two minutes and is the only cue like it on the CD.  Still, I am glad that it is included here, so you can hear its interesting harmonies.

The remaining cues are built off the songs' themes, altered in style and mode to reflect the action on the screen.  For example, one of the movie's overarching ideas is the eternal conflict between men and women.  This tension is evident in the difference between the themes for the men and women.  The more womanly themes, such as the "Sigh No More" theme, float and flow while the masculine themes, such as the boisterous march in the overture, are angular and martial.  How they are used provides interesting commentary on the relationship between the sexes (though these in no way represent my opinion - just wanted that stated before I was flooded with angry e-mails!)   The women's theme, "Sigh No More," is sung in its entirety once, when only men are on the screen and solely for their amusement.  Likewise, by the end of the movie, when all are married, the "Sigh No More" theme becomes dominant and erupts in a joyous choral fanfare, leaving the masculine themes no where to be found.

The movie is sun drenched and warm, and the music echoes that feel by remaining for the most part in rich major harmonies.  But when Don John (played by Keanu Reeves) schemes, the action moves into dark, dimly lit rooms, the acting level disappears into Reeves' black hole of acting, and the score, fittingly, moves into the minor mode.  As soon as the main characters reappear, the music shifts again into major.  The only other occurrence of minor is when Claudio visits Hero's tomb.  Like the Don John scenes, which use a similar theme, the visit happens in the dark lit only by firelight.

Patrick Doyle's Much Ado About Nothing remains one of his best scores.  It furthers the light, happy feeling Branagh aimed for in the production and comments on the screen action without overtaking it.  My one complaint is in the liner notes for the score.  Little to no information is offered such as if Doyle borrowed themes from his earlier score to this play for the Renaissance Theatre Company.  But uninformative liner notes are nothing new in film scores, and it is a small thing when compared with the value and pleasure this score brings.