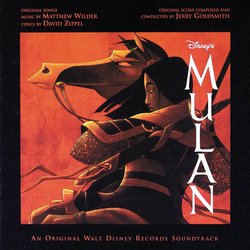 by Dan Goldwasser September 20, 1998
4.5 / 5 Stars
Disney's latest animated feature, MULAN, features 5 new songs by Matthew Wilder and David Zippel, and a much anticipated score by Jerry Goldsmith. As most Disney CDs are arranged, we are first presented with the songs.

"Reflection", sung by the very talented Lea Salonga, is the song worthy of the Academy Award, and seems to be the one song that truly fits into the film. "I'll Make a Man Out of You", sung by Donnie Osmond, is a neat song and probably works well in the film. "Honor To Us All", and "A Girl Worth Fighting For" are also nice songs, but more suited towards a Broadway production than an animated film. One major complaint I have regarding these last two songs is the fact that they got Harvey Fierstein playing one of the characters, and if you've heard him try to speak, it's hard enough trying to listen to him sing.

We are also given two pop songs - one, "True To Your Heart" is sung by Stevie Wonder and 98 and seems very out of place on this soundtrack. The other, "Reflection (Pop Version)" is sung by Christina Aguilera, who has a great singing voice, and is a nice way to end the album (as is expected with a Disney release).

The other tracks are score - or so I thought. "Suite From Mulan" certainly sounds like Goldsmith, but it seems to be more music from Wilder's songs with the Goldsmith "touch". Whether Jerry actually had a hand in this suite is unknown to me. It is, however, a nice suite - parts of it sound like vintage Goldsmith, and others have a touch of STAR TREK: FIRST CONTACT.

The rest of the score is simply golden. Currently the best Goldsmith score of the year (still waiting on SMALL SOLDIERS and STAR TREK 9), this score has everything: classic Goldsmith with an Asian element, bits of synth that feel like LEGEND, and a driving orchestral rhythm that feels a bit like THE GHOST AND THE DARKNESS. Due to the inclusion of the "suite", the amount of score presented on the CD is reduced to just over 25 minutes; a shame considering that Goldsmith wrote a little over 50 minutes for the film.

One problem with the songs and score is that there is very little overlap. In the past, we've had Alan Menken write the music for both the songs and the score, and as such themes have carried over. In THE LION KING, Elton John wrote the songs, and Hans Zimmer the score - but Zimmer arranged the songs for use in the film, while John performed the "pop" versions. As such, there was a constant style to the music and the songs. Unfortunately, that is not the case here. The songs feel like they should be on Broadway, and Goldsmith's score feels like it should be in the movies - which it is. Why is Disney convinced that all animated features must be musicals to be successful? If anything, TOY STORY should be proof that it's not necessary.

But the songs are nice, and the score is great. I simply cannot wait to see the film with this music playing. Dare I say Oscar Nomination? Probably, and not just because it is a Disney film. Jerry has managed to throw us a mixed bag of scores over the past few years. While most of it is good stuff, it is only so often that he gives us something great. Last year, it was THE EDGE, a score which was overlooked due to its attachment to a film that was not a critical (nor financial) success. This year, MULAN will certainly attain the financial, if not the critical, success. As such, it be in Goldsmith's best interest to start making space on the mantle.