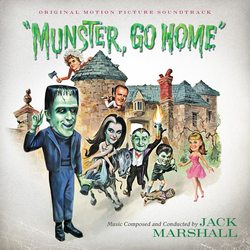 With Marshall's score to The Munsters, TV series a vital part of the show's massive appeal - his main titles had already become a thing of legend – it made perfect sense that he score Munster, Go Home, once again bringing his irresistible swinging version of mock-macabre… except this time, taking full advantage of a larger orchestra recorded in stereo! The result is a full-bodied, joyful musical exploration of The Munsters that finally shines here in its world premiere debut!