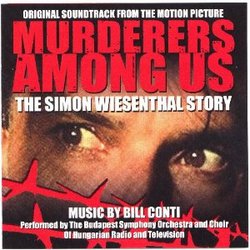 Murderers Among Us : The Simon Wiesenthal Story

The music for Murderers Among Us is composed by Bill Conti, performed by the Hungarian State Opera Orchestra and Chorus, conducted by the great Harry Rabinowitz. Previously released on compact disc by Bay Cities Records in the early 1990s and presented in the form of two lengthy suites, BUYSOUNDTRAX Records now presents Murderers Among Us in its entirety, including 25 minutes of previously unreleased music, newly remastered by Digital Outland.

Murderers Among Us is a limited edition release of 1000 units and includes new liner notes written by Randall Larson.