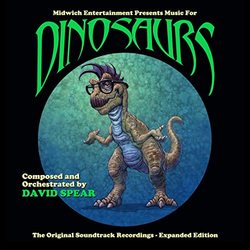 Dragon's Domain Records, to be distributed through buysoundtrax.com, presents Music for Dinosaurs, the expanded edition of the original soundtrack recordings for the Midwich Entertainment series Dinosaurs, produced by Richard Jones, featuring music composed and orchestrated by David Spear.

Released in 1984, Dinosaurs, was the first in a series of family-oriented documentaries produced by Richard Jones and hosted by Gary Owens and Eric Boardman. Dinosaurs, was a half hour program about a subject that hadn't been given much attention at the time.

For Dinosaurs,, Jones wanted an original orchestral score. He was not interested in library music or an electronic score. Composer David Spear was recommended to him. He had the distinction of being Elmer Bernstein's orchestrator on several scores and also Spear's parents produced and starred in children's programming that had a lot of original music elements.

Previously released on vinyl and audio cassette in the 1980's and later released on compact disc in the early 1990's with additional music, Dragon's Domain Records now presents Music for Dinosaurs, featuring previously unreleased music and also featuring selections from THE WONDROUS WORLD OF WEIRD ANIMALS and THE VOLCANO SHOW for the very first time. The music has been mastered by James Nelson at Digital Outland and the liner notes have been written by producer Richard Jones.