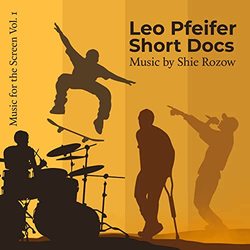 The album titled Music for the Screen Vol. 1 is a compilation of original scores to four short documentaries by filmmaker Leo Pfeifer. The scores to the shorts Lost Time, One Day You'll Go Blind, and Body Language: Bill Shannon have all won Telly Awards. The fourth film, Haven in the Booth won the Gold Telly Award for Pfeifer.

Each film tells a compelling, unique and inspirational story of overcoming incredible obstacles. Lost Time tells the story of a professional drummer who lost the ability to play professionally after suffering a stroke, but eventually found joy in playing for himself. One Day You'll Go Blind follows a competitive skateboarder who relearned how to skate after losing his eyesight and now teaches other blind people how to ride skateboards. Body Language: Bill Shannon focuses on Bill Shannon, who performs unique interpretive dance incorporating his crutches; and Haven in the Booth features a former drug addict who became a social worker and created a music program for at-risk youths to build a future for themselves.