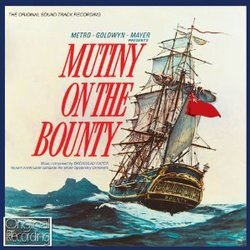 Mutiny on the Bounty

Review: Mutiny on the Bounty

This is the same program as the original LP release and is an excellent example of an outstanding composer, unfortunately underrepresented on soundtrack releases.

Nominated for the Best Score Academy Award in 1963 (and losing to Lawrence of Arabia), this release features only about 35 minutes of a score lasting more than two hours; however, the 35 minutes are choice.

Comparisons to the film reveal that some tracks were taken directly from the soundtrack (such as the "Outrigger Chase") while others are either edits from the soundtrack or rearrangements. The "Mutiny" and "Storm at Sea," for example, avoid the changes of music meant to accompany the cross-cutting of the film's scenes and the result is a more powerful and cohesive track.

The acoustics between the film and the LP/CD are identical and the performance by the MGM Studio Orchestra is top-notch. The examples of the native festival songs and dances are obviously recorded out-of-doors and the acoustics reflect that; however, there is a performance of the Love Theme performed in Tahitian which is beautifully recorded. Well worth the purchase for an outstanding "silver age" score.