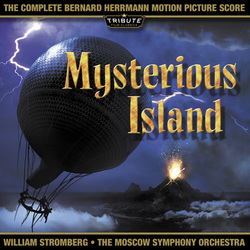 The music written by composer Bernard Herrmann for Mysterious Island (1961) was restored and re-recorded by The Moscow Symphony Orchestra for Tribute Film Classics. Also included are queues written for the film that did not make it into the movie. This is the labels' debut album and it is nothing short of amazing.

While Herrmann is known for his suspense scores, this action-adventure score remains Herrmann-esque. Conducted by William Stromberg, the stage is set for an epic score, with a big orchestra sound featured in the album's first track, "Prelude." This theme returns throughout the score. The dominating sound of the French horn stands out.

The next dozen or so tracks on the album are repetitive, as they were written for similar scenes. What makes the album is "The Giant Crab," "The Bird," "The Giant Bee 1 and 2," and the last quarter of the album

"The Giant Crab" expresses the fear that the characters were experiencing when a giant crab attacks them as soon as they reach the island. Once again, the French horns are at work, giving "The Giant Crab" the peril that comes with it. "The Bird" is a repeating theme that is passed throughout the orchestra and like "The Giant Crab" is very manic and quick. Much of the score that highlights the creatures of the island are meant to instill fear and uncertainty. "The Giant Bee 1 and 2" uses woodwinds and string trills to create a feeling of bees flying all around you—especially if heard in surround sound.

The final quarter of the album is non-stop action, as it highlights the characters' escape from the island. The pace is slow at times, but it picks up and keeps the listener waiting for a resolution. There is heavy percussion, especially during "The Earthquake" and "The Sub Deck." The same theme heard in the "Prelude" is brought back again and is varied to create more tension. The album ends with the "Finale" which mirrors the prelude, but ends in resolution as the main characters have left the island.

Tribute Film Classics has managed to bring back an otherwise forgotten film score by the legendary Bernard Herrmann. This a great album and a must-have for film music collectors.