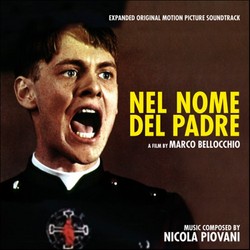 Expanded CD release of the religiously-charged score by Nicola Piovani for the film by Marco Bellocchio.

The film marked the first collaboration between Bellocchio and composer Nicola Piovani. Piovani's score for Nel nome del padre tries to be as delightfully sacrilegious as the film itself, featuring Baroque and Classical tunes laid out against the horrific scenes of Angelo's rampage, not to mention the haunting choral and organ passages for the religious setting.

The score was previously issued on LP and the same program received its CD premiere in 1996 by Point Records. Quartet Records presents the complete program of the score, mastered by Claudio Fuiano from the first generation stereo master tapes, featuring new cues and alternate takes of music that was already featured on the original soundtrack, though in an abbreviated form. The 8-page booklet featured liner notes by Gergely Hubai.