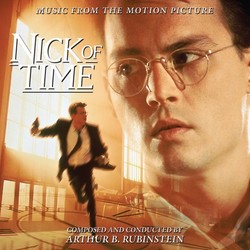 Conducted by Arthur B. Rubenstein

La-La Land Records and Paramount Pictures present the remastered and expanded re-issue of the original motion picture score to the 1995 feature film thriller Nick of Time.

Acclaimed composer Arthur B. Rubinstein unleashes an exhilarating, white-knuckler of an orchestral score to propel this exciting real-time, ticking-clock thriller. Produced by Dan Goldwasser and Neil S. Bulk and mastered by James Nelson, this special release is limited to 1500 units and features an expanded running time of over 68 minutes (more than double the running time of the original '95 release). Go behind the film and its music with all new, exclusive liner notes by writer Jeff Bond and sleek art design by Dan Goldwasser.