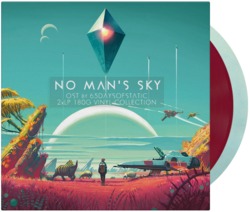 Hello Games and iam8bit are absolutely thrilled to bring the Original Soundtrack for No Man's Sky to vinyl. Composed by instrumental electronic band 65daysofstatic, this soundtrack makes you feel like you're truly out in the depths of space exploring the 18,446,744,073,709,551,616 planets that exist in the universe of No Man's Sky.

When the first gameplay trailer debuted in 2014, we became aware of just how integral music is to the No Man's Sky experience, so we couldn't imagine a better fit for this game than 65daysofstatic's thrilling score.

This gorgeous double LP features artwork by No Man's Sky artists Simon Stalenhag and Kuldar Leement, with each 180-gram record housed in a gatefold jacket that opens up to reveal a striking piece of concept art for the game.

As with all new iam8bit music releases, the audio is mastered specifically for optimal vinyl audio quality.