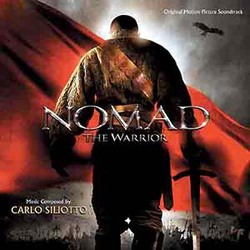 Carlo Siliotto\'s epic score to Nomad: The Warrior, a movie about the unification of the three tribes of Kazakhstan, is one of those great soundtracks that will probably slip under the radar of the casual film score fan. It is possibly the kind of score that gets mentioned by aficionados in the dusty corners of message boards, once in a blue moon, when they are asked about the little known gems in their collection. Tyler\'s Bubba Ho-Tep and Gordon\'s On the Beach fall into that category as well: the scores are great but the movies are little seen. Nomad: The Warrior will probably never become a blockbuster in the Western hemisphere and, as such, Siliotto\'s score will probably, and sadly, be forgotten by most. The composer has crafted a grand sweeping score, rich with complex thematic material and elevated above Hollywood number painting by the use of a traditional folkloric ensemble and local choirs to supplement the Western orchestra.

The Kazakh and West Mongolian colors are rendered by the use of a shehnai, a quadruple-reeded woodwind, whose nasal and high-pitched sound can be heard at the beginning of "Orders from the Khan". The erhu-sounding kobiz, a two-stringed cello, lends its muted voice to the minor melody heard at the start of "Kazakhstan 1710". The third native voice belongs to the dombra, a rich lute usually played tremolo like a mandolin, which can be heard prominently in the very last track, "Nomad". It is not the first time Siliotto has used these colors; indeed, a piece entitled "Furti" available on his website makes use of similar instruments backed by a traditional string ensemble. Nomad seems like the fruition of these ideas.

However, summarizing Nomad as a grouping of interesting colors would be overly simplistic. Once again, Siliotto\'s gift for complex melodies has resulted in a score rich with themes. Like in Spider-Man, they might not always be apparent, but the score does indeed sound like an intricate patchwork quilt, one theme flowing into the next with little room for incidental melodies and filler material. A track like "Kazakh Victory", a seven-minute mammoth compared to the much shorter cues that precede it, is a culmination of the almost entirety of Siliotto\'s thematic baggage and can serve as a guide for the whole score.

At 0:32, a fun and dynamic action theme in triple meter can be heard over short cymbal bursts. This theme was born in "Shangrek", accompanied at the time by woodblocks, triangle, and pizzicato strings. It grew in "Jungar Trials", a highlight of the album, interspersed between bursts of action material from the drums and a Jeff Beal-esque trumpet call. It bloomed in "Gaukhar Rescues Mansur", gaining speed and brass power, and it finally reaches maturity in "Kazakh Victory".

Following Shangrek\'s Theme is the dark, barbarous material for the invading Jungar at the 0:57 mark, consisting of throat singers and metallic percussion. The Jungars\' Theme could be heard at the 0:50 mark in the opening cue. The throat singers established a bass line over which the nasal shehnai and an aggressive choir voiced the theme, bookended by percussive triplets from the drums. "Jungar Encampment" is yet another example of this and Siliotto usually has the Jungars\' music violently interrupt the otherwise epic and romantic feel of the heroes\' melodies, as if the balance of peace is fragile and can be overthrown at any moment. "Kazakh Victory" continues with a hopeful announcement of the triumphant theme at the 1:25 mark, a melody which is taken to its heroic culmination at the 3:52 mark. It is a theme which climbs and slides down its scale and around which an opulent harmonic cascade is wrapped.

At the two-minute mark, Siliotto lets us hear the vibrant Friendship Theme, which forms the backbone of the score. The following track, "Nomad", is dedicated to it, the triumphant theme forming its second phrase. Its melody is resplendent and often phrased by the violins, flutes (or piccoli), and dombra. A French horn mourned it at the beginning of "Looking for the Child", which was quickly followed by a solo violin quoting from the triumphant theme. It is, in essence, the Shire Theme of Nomad.

"Kazakh Victory", however, has not yet finished recapitulating its thematic material. At 2:39, we hear the Nomad Theme, which feels like an inversion of the Friendship Theme, an expansive melody for the dream of unification. At 4:56, the victorious feel goes away and is replaced by the plaintive quality of the kobiz delicately articulating the Theme of Pain. It is the tortured melody which opened the album over somber string harmonies and it is only fitting that it ends the story as well.

Nomad contains other melodies and motifs such as the Love Theme heard in "Meeting Gaukhar"; the Kazakhstan Theme (which becomes Monsur\'s Theme), perhaps the most approachable of the score, used in the middle of "The Duel" for shehnai and choir; and a tension-filled motif for lower strings lifted from Eidelman\'s Star Trek VI score which can be heard in "Death of Erali", the only time the temp track seems to seep into the final score. It is refreshing to hear of a score where the themes are not attached to particular characters but mostly to emotions and settings. Nomad would lend itself well to a thorough, track-by-track analysis, but since I am not writing a book, I\'ll have to stop here. Highlights abound: a short list would include "Save Your Son!", "The Duel", "Jungar Trials", "Gaukhar Rescues Mansur"—in fact, whenever the action kicks the music up a notch and the themes are allowed to dance among themselves, Siliotto\'s music shines. But even in the more sweeping cues that lack the dynamic punch of the adventurous pieces, the music is great due mainly to a wealth of emotional thematic material and a fusion of the traditional orchestra with the folkloric ensemble. Nomad doesn\'t quite reach the level of thematic complexity achieved by Shore on The Lord of the Rings (to be fair, the material is much more restrictive), but it does transcend some of the best epic scores out there. It aims its arrows high and hits the bullseye almost every time. And, hopefully, it won\'t be forgotten.