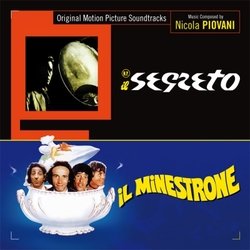 Silvano Agosti's Il segreto (also known as N.P., 1971) is a dystopian parable about an engineer whose inventions are turned against society once he looses his memory. As the main hero's gradual awakening gets him involved in strikes and conspiracies, Piovani builds his music around a recurring motive based on Sergei Rachmaninoff's Rhapsody on a Theme of Paganini. The catchy symphonic rock adaptation of the classic melody is incorporated into almost every cue, including the tunefully fierce music for the strikes.

Il minestrone (1981) is an early role for Academy Award winning actor/director Roberto Benigni who later hired Piovani for the film that brought the composer his Oscar, Life is Beautiful. Il minestrone follows a group of hungry rascals who try to figure out different ways in order to fill their stomachs at no cost. The three-hour miniseries features a catchy Piovani score with a great main theme, folksy connective material and once again brilliant references to classical music - this time it's Die Fledermaus by Johann Strauss.

Only the main theme from Il minestrone had any sort of released before. The CD includes over an hour's worth of new music with an attractive package rounded out by a richly illustrated booklet, including liner notes by Gergely Hubai who discusses both films and scores.