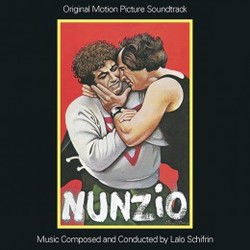 He may not be what the city wants, but he is certainly what the city needs... Nunzio is a developmentally challenged man who dreams of becoming a superhero while working his mundane delivery job. After acquiring a "fitting costume" and learning how to fly (aka jumping on rooftops and fire escapes), he decides to pursue his dreams further. While everybody apart from the local children laugh at his pursuit, a freak fire incident may elevate Nunzio into the pantheon of superheroes.

Lalo Schifrin's lovely "superhero score" builds upon Nunzio's idea of becoming a beloved hero—and the music certainly matches the dreams rather than the reality. The composer also fashions a beautiful love theme for the main hero's unrequited infatuation with a local shop girl, and the final fire rescue gets due heroic treatment as well. Like the composer's other late '70s scores (such as The Amityville Horror), there's also a catchy disco remix of the main theme.

The CD features the same program as the original MCA LP, which covers most of the complete score. The audio was mastered by Chris Malone, and the 8-page liner notes by Gergely Hubai discuss the film, the composer and the score.