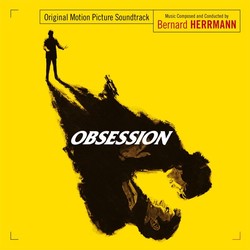 In collaboration with Litto Enterprises Inc., Music Box Records is very proud to present the reissue of one of their most ambitious releases yet - a classic Bernard Herrmann score from one of his last efforts and an important milestone in his immense career for Brian De Palma´s classic melodrama Obsession (1976) written by Paul Schrader and starring Genevičve Bujold, Cliff Robertson and John Lithgow.

In a career often spent paying tribute to Alfred Hitchcock with the likes of Dressed to Kill, Blow Out and Body Double, Obsession even today stands as De Palma's ultimate fever dream homage to the director who'd made Bernard Herrmann a household name as the romantic master of musical suspense during an eight film collaboration, no more so than with 1958s Vertigo. Obsession remains his most fervently romantic, and dare one say innocent attempt to recreate the studio gloss of a time when outright violence and sex were left to the mind's eye, its rage and sensuality truly made explicit in its music. It's a powerful, stylistic subtlety that increasingly made Obsession into the filmmaker's most discerning cult film.

Bernard Herrmann returned to his grandly symphonic style and composed a stunning score, filled with powerful themes, ominously underlined by an organ, or a harp, sometimes with abrupt choral flourishes, in eerie evocations of a mystery. He again created an unusual combination to underscore the drama: a large cathedral organ and timpani as primary musical signature characters, and a small choir of wordless and sighing female voices, horns, winds and strings. The score was nominated for an Oscar for 'Best Original Score' in 1977.

Music Box Records is pleased to present what was CD 1 of the previous 2-CD release (the second CD was simply the release of the original LP album that is not included in this 1-CD release) – the complete score to Obsession. For this new single reissue, the sound of the 2015' Special Archival Edition has been improved and remastered. The complete score has been reconstructed and restored from the best sources available (the 5.1 Music Stem, the original 1976 soundtrack album and a safety copy of the original tapes).

Limited to 500 units, this present reissue includes a 24-page full-color booklet with liner notes by Daniel Schweiger, sharing his comments about the film and the score, including new interviews with editor Paul Hirsch and producer George Litto.