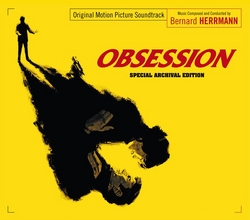 In collaboration with Litto Enterprises Inc., Music Box Records is very proud to present one of its most ambitious releases yet—a classic Bernard Herrmann score from one of his last efforts and an important milestone in his immense career for Brian De Palma´s classic melodrama Obsession (1976) written by Paul Schrader and starring Genevičve Bujold, Cliff Robertson and John Lithgow.

In a career often spent paying tribute to Alfred Hitchcock, Obsession even today stands as De Palma's ultimate fever dream homage to the director who'd made Bernard Herrmann a household name as the romantic master of musical suspense during an eight film collaboration, no more so than with Vertigo. Yet Obsession's reincarnation of that masterpiece showed just how devious De Palma always was in his admiration, cloaking a truly seditious plot twist that would've given even Hitchcock pause within sleek, star-filtered visuals.

When at last Herrmann returned to his grandly symphonic style for a movie with a major pedigree, Obsession resounded with more haunted passion than ever before. It was a much movie score as it was Herrmann's own requiem for an uninhibited scoring style that had become a ghost of itself in Hollywood. He composed a stunning score, filled with powerful themes, ominously underlined by an organ, or a harp, sometimes with abrupt choral flourishes, in eerie evocations of a mystery. He again creates an unusual combination to underscore the drama: a large cathedral organ and tympani as primary musical signature characters, and a small choir of wordless and sighing female voices, horns, winds and strings. The score was nominated for an Oscar for 'Best Original Score' in 1977.

For this special archival edition 2-CD set, Music Box Records has gathered the best sources available to this day in order to present faithfully the original score written by the composer. CD 1 presents "The Film Score." With the precious technical assistance of our sound engineer, we did our best to reconstruct and restore the score from the 5.1 Music Stem (courtesy of Sony Pictures) and a safety copy of the original tapes. The result is stunningly convincing. As such, we kindly ask you to listen to our samples and make a decision on the quality yourself.

CD 2 presents "The Original 1976 Soundtrack Album" (courtesy of Universal Music) that was edited from Herrmann's sessions and was specially remastered for this edition. We also corrected the cue titles of the 1976 London Decca release which were misnamed and incomplete in tracks 4 and 5. Now you have the details of all the right cues used in the original LP.

Our release offers a rare opportunity to hear the magnificent romantic Herrmann score in two different presentations and preserves the composer's own irreplaceable interpretation, bringing this marvelous music back to life just 40 years after it was written. This Deluxe Edition with slipcase is limited to 3000 units and includes a 24-page full-color booklet with in-depth liner notes by Daniel Schweiger, sharing his comments about the film and the score, including new interviews with editor Paul Hirsch and producer George Litto. Everyone will no doubt be "obsessed" with this true original masterpiece!