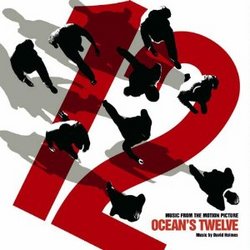 For something to be cool, it can't try to be cool. It simply is - and David Holmes definitely is.

Holmes is not just another UK electronica DJ turned composer. His mixture of low key drum-n-bass groove with awesome 70's funk and jazzy Lalo Schifrin influenced chords has always been cinematic. Every score of his tends to remain in my iPod for years. Director Steven Soderberg alternates between working with Holmes and composer Cliff Martinez; using Martinez for his dramas and Holmes for his fun films. With Out of Sight and Ocean's Eleven, Holmes cemented a retro style that is neither kitschy nor clever that is both now and then at the same time.<

This soundtrack is more of the same in the best way. As a sequel to Ocean's Eleven, Ocean's Twelve is a mid 60's Italian heist movie and Holmes captures the vibe of the times. Light, sexy, fun and most of all, cool. He puts focus on the guitar this time out, creating psychedelic rhythms with mandolins, bongos and old Moog keyboards and mixing it with brassy horns and small touches of drum-n-bass. The DJ in him comes out in the sheer range of music that is referenced. You can hear small snippets of tons of 60's composer (John Barry, Henry Mancini, Ennio Morricone) and if you name it, it's probably sampled. Even Oasis gets recalled ("$165 Million + Interest"). Pastiche can come off coy if it isn't done sincerely, but Holmes' talents are in his loving effortlessness. The other tracks are pulls from the very film Holmes is referencing ("Explosive Corrosive Joseph", "Ascension To Virginity", etc.).

What is impressive is how cohesively it all comes together. Thankfully this album doesn't have the obnoxious dialogue samples used on the Out of Sight and Ocean's Eleven that get in the way of the music, which is never cool.

This soundtrack is the road music album of the year.