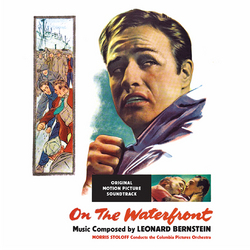 The 1954 Columbia Pictures' film On the Waterfront features musical giant Leonard Bernstein's lone movie score. Producer Sam Spiegel asked Bernstein to write the score and the composer, who had emerged over the previous decade as one of the most well-known and respected classical musicians in America, initially declined. Flush with work—as a composer, a pianist, a teacher and, especially, a conductor—he doubted he would have time. But after witnessing Brando's stunning performance and seeing the power of the film, he could not resist the opportunity to add his own musical dimension to the story.

The Oscar-nominated score has only previously been available as a rerecording in suite form. For this premiere release of the original tracks, Intrada was provided with all the tracks stored at Sony Pictures and thus commenced the restoration effort. The bulk of this release is sourced from acetate transfers of the sessions, preserving almost every cue, including material not heard in the finished film. To supplement those near complete disc transfers, Sony also located the music-only stems, allowing Intrada to include every other musical sequence not present on the acetates—primarily the source music cues from reel five, set in the saloon.