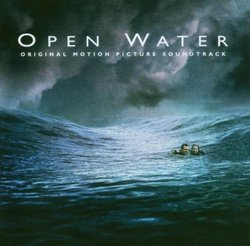 Open Water - a low-budget project filmed in documentary style with unknown actors - is being hailed as the scariest shark thriller since Jaws. The movie takes place in the Caribbean Sea, having been relocated from Australia where the event that it is based on took place. The soundtrack contains a bunch of songs and eleven minutes of Graeme Revell's original score. The songs are different: they are a mix of Caribbean blues and South Pacific hymns. The latter calls to mind the hymns used in Hans Zimmer's The Thin Red Line. Some of these songs, though, sound as if they were captured with an old portable tape recorder. This effect may have been useful in the film, but it is a bit annoying on the album.

Australian composer Graeme Revell has a talent for writing music that is perfectly appropriate for a film, and Open Water is no different. However, some of his music does not translate well onto the album nor makes for a good listening experience. Such is also the case for Open Water. It is an approach similar to Harry Gregson-Williams' score for Phone Booth last year, providing an electronic underscore that enhances the tension of the thriller, but is little more than filler music. The score to Open Water is a mix of ambient electronics that clearly enhance the conditions of the film: the harshness of the open water, and the muddled tones of underwater, which were also experimented with in Crimson Tide and Deep Blue Sea.

Revell adds some light percussion and chimes in "Cleaner Fish". "Finding the Dive Bag on the Boat" has a very brief moment of pounding drums at the end. "Sharks Close" and "Sharks Circle" slowly crescendo throughout the cues as the tension builds, ending the album with the latter track with a powerful timpani roll. Trailer music virtuosos Immediate Music also contribute a track to the album, "The Nest (Dive Boat Leaves the Site)" which is an unremarkable monotone electronic cue. While I think Revell's score is appropriate and fits the film well, I have a hard time recommending the album because, between it and the mix of songs, it is not a pleasant listening experience. Some of Revell's other work is much more enjoyable on CD, such as Red Planet, Below, or The Chronicles of Riddick.