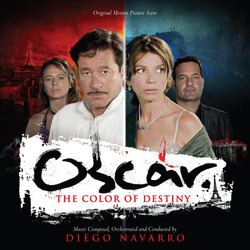 Oscar: The Color of Destiny / Look at the Moon

Also features a suite for chorus and orchestra from Look at the Moon.

Oscar: The Color of Destiny is a revealing portrayal of a forgotten icon of French Surrealism: Spanish painter Oscar Dominguez, contemporary of Picasso. The film rediscovers the life of a talented artist who was ignored after he committed suicide fifty years ago, victim of the Elephant Man's disease, which had disfigured his body. The film is stirring and touching, and compels admiration for the bohemian painter whose fate was self-destruction, after a wild, crazy life.

Spanish composer Diego Navarro makes his Varese Sarabande debut with this stunning tour-de-force for orchestra and choir. Oscar: The Color of Destiny is an album not to be missed by those who love classic film music composed in the grand tradition of years gone by. Sweeping, vibrant and richly thematic, this score is an absolute treat! The main theme is both beautiful and tormented, probing the passionate and psychological depths of the complicated artist. This album also includes a newly recorded piano solo of the powerful melody. To conclude our presentation of music from Oscar: The Color of Destiny is a remarkable suite for symphony orchestra, mixed choir and piano.

Also featured in this beautifully recorded live concert from Tenerife is Navarro's soaring Look At The Moon. The music is mesmerizing and glorious. Those not familiar with these films, which probably includes everyone outside of Spain, are encouraged to give this music a listen.