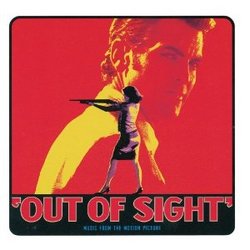 Review: Out Of Sight

Well, I could figure a better soundtrack to follow in the footsteps (both literally and figuratively) of Get Shorty. The soundtrack, composed by newcomer David Holmes, and supplemented by several soul/jazz tunes by such luminaries as the Isley Brothers and, believe it or not, Dean Martin. After it's highly praised critical reviews, this film slipped in obscurity shortly after it was released in early summer 1998, so much so that I have yet to see it, but anxiously await it's arrival on DVD. If there is one thing you can give the score and soundtrack production, it would be that it is fresh and inventive. Most films, or at least the way this one was promoted, would birth a rather slickly produced album of hip-hop or alternative tracks that would have the sub-heading "inspired by" under the title. Fortunately for us, the album's producer is also the composer, so we get a nice mix of pop-sy tunes combined with a rather funky, and appropriate, score. It clocks in close to 50 minutes, and is just about right for a casual listen, which you really can't say about many soundtracks released today. It has no pretensions, it's fun, and, from what I know, integrates well with the characters and themes of the film, exactly how Get Shorty was with another Elmore Leonard novel-come-film.