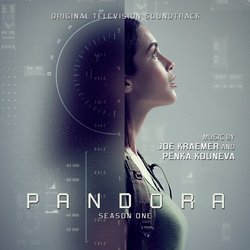 La-La Land Records proudly presents Pandora: Season One, the original television soundtrack to the acclaimed first season of the hit sci-fi series Pandora, airing on The CW, and starring Priscilla Quintana, Oliver Dench and Raechelle Banno. Renowned composers Joe Kraemer (Jack Reacher, Mission: Impossible - Rogue Nation) and Penka Kouneva (Encounter), create an astounding musical universe for this imaginative series which takes place in a futuristic 2199, where the students of Earth's Space Training Academy find themselves dealing with everything from extra-terrestrial invaders, crime lords, political subterfuge and more, to their own inter-personal relationships. It's a vast universe of drama, thrills, wonder and action, and composers Kraemer/Kouneva meet this challenge with a first season full of dynamic and varied scores – the highlights of which are represented on this knockout presentation! Produced by Joe Kraemer and mastered by James Nelson, this CD release features exclusive, in-depth liner notes by writer Daniel Schweiger, taking you behind the show and its music, with comments from the composers and series creator, Mark A. Altman. The stellar art design is by Mark Banning.