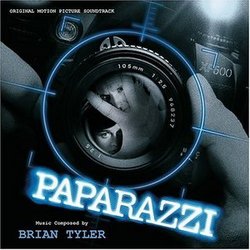 Performed by
The Northwest Sinfonia / The City of Prague Philharmonic

Brian Tyler has broken away from being typecast as a horror genre composer more easily than some may have expected. While still taking the occasional thriller project, such as Godsend, Tyler's work has recently been shifting more toward action films such as The Hunted, Timeline, Children of Dune, and now Paparazzi. However, genre categorizations aside, one thing remains constant in Tyler's scores, which is the aggressive approach he takes to each project. Large orchestral ensembles and wide arrays of solo and ethnic instruments make every score by Tyler an exciting and enjoyable listen both in the film and on album.

For Paparazzi, Tyler returned to the feeling of The Hunted, with pounding percussion and sizzling electronics, but tones down the asymmetric approach. Thematically, Paparazzi is more similar to Children of Dune: Tyler wrote a theme for the main character, played by Cole Hauser, heard in "The Awakening" and "Resolution" and also a theme for the Paparazzi, which is made to sound like swarming insects ("End of the Line"), which undercuts much of the action music. Added with the buzzing theme for the Paparazzi is the annoyance of someone always in your face, a part which Tom Sizemore plays quite well.

Paparazzi is not nonstop aggressive action music; Tyler mixes up the sound a bit throughout the film. Three cues on the album accompany scenes where Hauser's character is in the limelight of his fame: "Celebrity Life", "Premiere", and "Fans and Lights". The first two of these cues take on a more pop/rock feel as if from "Entertainment Tonight" or MTV. "Fans and Lights" uses an acoustic guitar and soft vocals to create a surreal sound of flashing cameras. Vocals by Azam Ali add a new dimension to the slower parts of the film - "Aftermath", "The Awakening", "Intruders" - that resemble parts of Children of Dune. "The Awakening" is one highlight, combining the full orchestra with the vocals in a performance of the main theme backed by horns. Tyler's use of brass in this score is limited mostly to low brass in the action cues, with the rare exception as in this cue. While rhythm is not as much a key part of this score as it was in The Hunted, Tyler again utilizes various percussion and electronic beats, as in "Discussion with a Detective" and backing most of the action cues.

The tracks on the album are short, common for Tyler releases, making the music seem to play even faster. Paparazzi is not just an action score; it is a emotional and aggressive composition. Tyler's themes are used well; the theme for the Paparazzi is a sound effect used in insect movies (i.e. The Swarm by Goldsmith) but here is utilized as a clever metaphor for the annoying - yet deadly - reporters. This effect makes the music both more cohesive and more intense. The Hunted album release was short for a Tyler score, but for good reason, as the music was a difficult - if not enjoyable - listen. Paparazzi, running just under an hour, could have benefited from a slightly shorter run time, as some of the music begins to sound repetitive by the end. Overall, though, it is another solid action score by Tyler.