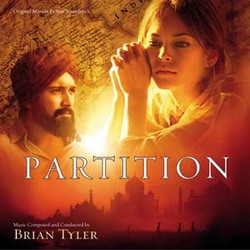 Brian Tyler hit the ground running in 2003 with a series of mainstream scores, including the epic mini-series to Frank Herbert\'s Children of Dune. Early on, it seemed that Tyler would tackle a different genre with each scoring assignment. That, of course, could not last. With Partition, Tyler returns to the ethnic woodwind tone of the quieter parts of Children of Dune. The score album is structured like a typical Tyler album: a main theme followed by a large number of generally short cues and then an end credits suite. The main theme, introduced in "Partition", is a sweeping, majestic melody in the strings and stated often throughout the score with other instruments added for texturing. The woodwinds and strings dominate the score, however, with the minimal brass presence as sound color, as in "Attack at the Crossing".

"The Crossing" begins with a series of moving chords that follow the general theme progression. While these chords are slow, Tyler throws in brief statements of the theme in languid eighth notes to keep the music from being weighed down and slow. This cue builds slowly into a layered string piece with ethnic woodwinds and French horn. This cue leads into "Attack at the Crossing", which is in a similar style to the action cues of Dune, with percussion and moving string lines. Brass comes in toward the end. The theme is never far away and it returns in full in "Naseem\'s Journey", but in a 6/8 time rather than the 4/4 from the opening cue. (At least Tyler went for a beat I could count and not the 19/8 from The Hunted!) These first few opening cues cover most of the album in terms of the main musical ideas, which are rewoven throughout the score. For example, the drawn out "Sirsa" weaves the theme in around some tenser, atmospheric music.

A few other cues stand out. Toward the end of "Transformation of Gian", Tyler uses both drums and plucked strings for a percussive effect, which return in "Crossing the Border" and "Free", the former of which uses echoing vocals in the background. "Coming of Age" is the only cue that uses a vocal soloist, here along with light percussion and strings. Some quieter moments that bring out more of the ethnic tones without the cover of the orchestra include "Bombay" and "Separation". A number of these solo ethnic instruments were performed by Tyler, as was the percussion and piano. Varese Sarabande\'s album release is long, about 2 minutes short of filling the disc. While scores such as Children of Dune could have benefited from a longer release, smaller score of this nature begin to get bogged down with long albums. I think Partition would be better enjoyed on album with a release more along the lines of the 45 minutes of Timeline, for example. I like his theme for Partition; it properly evokes the setting of World War II India and has a good mix of orchestration and solo ethnic elements. While not among Tyler\'s relative best, this score is a nice listen for fans of sweeping themes with an ethnic flavor.