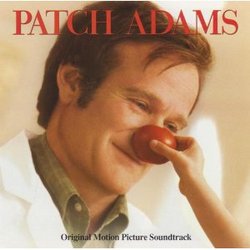 The nice thing about movie scores nominated in the "musical or comedy" category is that they are, almost to the one, delightful listening experiences. Whereas some brilliant dramatic scores are even a task to sit through, these lighter scores are commonly quite pleasurable. Marc Shaiman is well known for his scores for A Few Good Men, The First Wives Club, The American President and many others. He is a multiple Academy Award Nominee.(see footnote) Ah well, c'est la vie.

Patch Adams, starring Robin Williams in the title role, is the story of a highly intelligent, former self-committed mental patient, who enrolls in medical school. His views and his techniques are unorthodox (at least for the day), and he has to battle with the school's administration just to keep his spot. The tale is a true one, based on the real Patch Adams who currently heads the Gezuntheit Clinic in West Virginia.

Mr. Shaiman's score for the film is wonderful. It is sympathetic in its tone and sweeping in its execution. If you want to compare scores, it is more similar to The American President than it is to A Few Good Men. It uses the same broad strokes as it touches upon some of the same themes (battling against the odds, striving towards noble goals, winning the one you love, etc). Consider the broad themes the movie encompasses: innocence, discovery, innocence lost, and triumph, and you pretty much have the feel of the score.

The beginning of the score (I'm not really going to touch on the first 9 tracks, which are all pop and rock tunes) is a gentle, simple piano piece. In some ways it reminds me of Forrest Gump. In fact, that's yet another good way to look at this score (and this character)! They're both a good mix of Forrest Gump and Andrew Shepherd: gentle and quirky, beautiful and intelligent. The music continues to use the piano frequently. It will at times mix it with some flute in the background until the entire symphony decides to join in for the sweeping sections. You can usually feel those sections coming, but there is pleasure in the anticipation.

The only thing I see lacking in this score is some more development of the darker side of the film. I am not certain if the score left it out, or if the CD left out certain tracks from the score. Any insight from readers here would be welcome. This is the kind of score that I love and do not want to bet against. I hesitate to refer to it as common, simply because Shaiman makes it look easy. However, I will say that I am not sure if it merits that "Achievement in Scoring" nod. In many ways, I feel that he already composed this score before, and he does face some stiff competition this year. Remember, though, that does not keep it from being a truly enjoyable listen.

Footnote: Indeed, he is a multiple nominee. In my review of the score for "Elizabeth" I mentioned that David Hirschfelder does not have the name recognition of a John Williams or James Horner. My editor pointed out his work on "Shine" as just one example of his strong reputation. I should have clarified that I was referring to popular name recognition. Currently, I believe the average casual listener to film scores would readily recognize the names like Williams, Horner, Jerry Goldsmith, and even Hans Zimmer. However, Hirschfelder has, in my humble opinion, not gained as much attention outside of the circle of soundtrack devotees—YET—that these others have. I love his work, as many of you do, however, so I should have been more careful in my wording. Apologies and explanations.