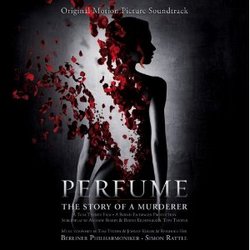 Perfume: The Story of a Murderer

Review: Perfume: The Story of a Murderer

Reinhold Heil and Johnny Klimek write very functional scores for film but, using The Cave as a prime example, generally do not translate well to album. However, the album for Perfume: The Story of a Murderer is a much better listening experience. This score, composed along with director Tom Tykwer, features the Berliner Philharmoniker, the State Choir Latvia, sopranos Chen Reiss ("Meeting Laura") and Melanie Mitrano ("The Perfume"), and boy soprano Victor de Maizière ("Laura\'s Murder"). The solo soprano vocals and light chimes that permeate the score are reminiscent of Elfman\'s Sleepy Hollow, and it creates a tone that is very appropriate to the film, which is set in a similar time. "The Streets of Paris" retains this feeling, with light, moving string and trumpet chords. This score is also a step above a more recent period film, David Julyan\'s minimalist score to The Prestige, and is often at the forefront of the film. Tykwer et al. create an interesting theme that is more recognizable by its performance than by its melody; the soprano voice is the Women\'s Theme (or some might argue the Woman\'s Theme, referring to the girl with the plums).

In the film, Dustin Hoffman\'s character describes perfume as being comprised of twelve scents which, when mixed by the skilled hands of a perfumer, create a layered, complex scent which he likens this to the creation of a musical chord with individual notes. Unfortunately, the score never reaches the complexity that Hoffman refers to. I would have liked to have heard some sort of chord progression to reflect this, perhaps increasing as Grenouille adds to his perfume. Nevertheless, the score works well in the film, and is also an interesting listen on album. The first performance of the Women\'s Theme is in "The Girl with the Plums" which begins Grenouille\'s obsession and is the basis for this theme\'s progression. Between the solos in this cue, the music becomes very dark and tense, a trend that continues in the following cue, "Grenouille\'s Childhood". A second theme is based on its melody, as heard in "Moorish Scents" on the oboe and, of course, "The Streets of Paris" with the orchestra.

The Women\'s Theme returns in "Meeting Laura" and, while it is very prominent in the film, specifically used for scenes including a woman Grenouille is interested in, it does not appear frequently on the album. "Lost Love" feature The State Choir Latvia solo, though the choir appears in a number of cues. The boy soprano is only featured in the darker, more creepy "Laura\'s Murder" to good effect. A few times in the film, the music has to take over during montage scenes, namely in "Distilling Roses" and the darker "The Method Works". The triumphant and elegant end to the cue "The Perfume" brings to bear a new level to the music as the perfume is complete and adds the soprano vocals to the orchestra. This correlates with the scene when Grenouille completes his perfume and we see the final scent mix with the others. The album closes with a very distant soprano solo that fades away.

It is unclear to what degree each of the three composers contributed to the score, but it is a much better album than the other scores I have heard from Klimek and Heil. While the music has a strong presence and the use of the solo vocals to represent the women Grenouille is obsessed with is well done, I feel that the composers could have taken it a step further. That having been said, the album progresses nicely and the elements to come together at the end in "The Perfume". I think the album will make more sense to someone who has seen the film, which I highly recommend.