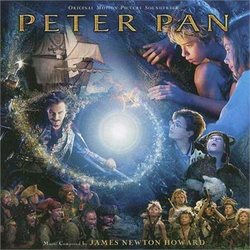 James Newton Howard has more than proved himself an able writer of high-spirited children's adventure scores.  He has become Disney's composer of choice for animated projects that do not involve inanimate objects singing: his Atlantis score soars with rich orchestral themes, his Dinosaur score creates an expansive backdrop for those noble creatures, and even his oft-overlooked Treasure Planet score dances with charm.  Therefore it was no surprise to see that he had been picked to score the new live-action version of James M. Barrie's classic novel Peter Pan that P.J. Hogan was directing.

Since there have been so few live-action versions of the Peter Pan story, and since the last was Steven Spielberg's sequel Hook, Howard's score has received much comparison to John Williams' magnificent writing for that movie.  Perhaps there is some justification for the comparison as both movies lacked the special spark that makes such movies classics, and in both instances the score, written for huge symphony orchestra, stands up so well on its own, but in the end it damages more than it illuminates.  Howard's Peter Pan, while not up to the level evidenced in last year's Signs, is a strong piece of writing, expanding upon film music clichés in surprising ways.

Think for just a moment how you would score a movie about a young boy who refuses to grow up, flies and can impart that ability to others by sprinkling pixie dust, and does battle with a band of nasty pirates.  You probably would begin with a celeste, daintily dancing in lilting 6/8 time.  The celeste would soon be joined by a wordless children's choir and then the full orchestra in a statement of the original celeste theme.  You might throw in some swirling strings and low male voices accompanied by brass to symbolize the dreaded pirates, but that theme would not last for very long as the light spirit of the opening would overcome all obstacles.  I have just described the "Main Titles" of Howard's Peter Pan; in other words it is just what you would expect.  But then, in the second cue, "Flying," he does something quite off-putting.  It opens predictably enough with children's choir, but something is off from the very beginning.  The bell ostinato is a series of three measures of 6/8 time followed by one of 3/4.  It is just enough of a change to through you off for a moment.  Then, almost a minute into the cue, there is an enormous drum hit and a low bass pedal enters supporting a melody on synthesizers that can only be described as being straight out of Vangelis's work for Chariots of Fire in the early 1980s.  It is as though Howard were suddenly possessed by the spirit of Chip Davis in his early Mannheim Steamroller days.  If you are like me, you shake your head for a moment (especially when the drums fully enter), but you keep listening because the sound is so novel in this day and time.  By the time the orchestra returns a minute later in a flurry of dissonant counterpoint leading up to a glorious statement of the flying theme with full chorus and orchestra you realize that strangely enough it all works.  Howard has managed in his three and a half minute cue to capture the exhilaration of flight by putting you off your guard.

Unfortunately the rest of the album cannot sustain the intensity or novelty of "Flying."  Most of it is as you would expect in terms of orchestration but strangely enough not in thematic development.  Peter Pan is not a theme-rich score with only the main title theme receiving extensive development.  The few other themes are simply restated as when the synthesizer theme from "Flying" reappears in "I Do Believe In Fairies," losing some of its power to amuse and delight in this new, expanded setting.  Instead the score progresses from moment to moment.  This tactic causes some meandering through the middle of the disc, although there are several shining cues.  "Come Meet Father" contains a penny whistle and guitar, both in solo settings and as a duet in a lively dance exchange.  The longest cue, "Fairy Dance," is awash in delicate writing and is truly enchanting, even containing hints of the harmonic progressions Howard previously used in Unbreakable.

So, in the end many will ask if Peter Pan is a better written, more cohesive score than Hook.  Probably not, but the real question should be will you be thinking you'd rather be listening to Hook while engaged with Peter Pan.  Definitely not.