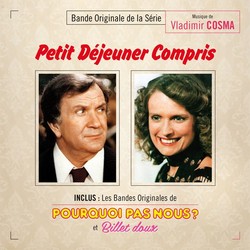 In collaboration with Sony ATV and Larghetto Music, Music Box Records is pleased to present on CD the collaboration between Vladimir Cosma and director Michel Berny: the two TV series Petit déjeuner compris (1980) and Billet doux (1984) and the feature film Pourquoi pas nous? (1981).

An old lady's slowly fading silhouette, set to a few notes on a melodica: such are the opening credits, marked indelibly into the memories of an entire generation of viewers, of Petit déjeuner compris. This six-episode series aired on French television became a smash success thanks notably to writing of the highest finesse by Daničle Thompson, the direction of Michel Berny, and the delectable music of Vladimir Cosma.

The main theme, based on a waltz in a moderate tempo and played on melodica, reflects the simplicity of this couple (Marie-Christine Barrault and Pierre Mondy), who inherits from an elderly aunt the management of an unusual family hotel. The original soundtrack includes other memorable catchy themes, bitter-sweet music and delicate colourings, such as that of guitar and electric piano. Petit déjeuner compris features the original LP program, previously issued in 1980 and fully remastered from the master tapes for this new edition.

Pourquoi pas nous? relates the burgeoning and complex love of a man and a woman done no favours by life, and for whom, moreover, everything seems to stand in the way. In the main theme, two mandolins personify Marcello (Aldo Maccione), while two comedic synthesizers evoke the character of Jacqueline (Dominique Lavanant). The score is based on this instrumental duality which is also intended to accord credit to the two characters inhibited by their physical appearance and a manifestly mediocre destiny. The original score, presented for the first time on CD and remastered from the master tapes, features all the music written for the film.

This album also includes the original soundtrack to Billet doux with the same program previously released in the 2010 box set of Vladimir Cosma.

The limited edition of 500 units comes with an 8-page booklet with French and English commentary by Nicolas Magenham.