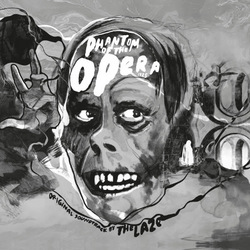 Phantom of the Opera

Performed by
The Laze

Modern re-score soundtrack to Rupert Julian's 1925 silent horror film The Phantom of the Opera composed & performed by The Laze.

Color Vinyl - 500 Copies Each
Packaged in a deluxe gatefold old school tip-on jacket. Available on clear with black and white splatter vinyl or clear and black split vinyl. The variants are inserted randomly. They come sequentially foil numbered (2 series of /500). Also included is a streaming card where you can find a private link to view the original 1925 movie synchronized with the new soundtrack. This card is exclusive to the limited vinyl edition. Original black and silver artworks by Luke Insect.