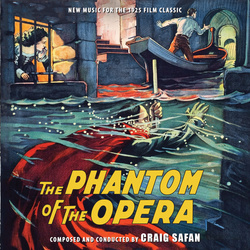 The Phantom of the Opera

Intrada's latest release features the oldest film represented in the Intrada catalog – the 1925 silent classic The Phantom of the Opera. While the film may be just shy of 100 years old, the score is not. Composer Craig Safan was commissioned to compose a new score, giving a new added dimension and depth to the silent tale of horror and passion on screen. This was not the first time Safan composed a new score to a silent film, having first composed a score in 2017 for Charlie Chaplin's The Kid.

To compose the score, Safan was quite cognizant of one thing: non-stop music for nearly an hour and a half can be exhausting. Not to compose or perform, but to listen to. In order to combat this fatigue, Safan's strategy was to create as much sonic variety as possible. This comes in the form or large Gothic, romantic music (including organ, of course!), quieter passages for solo instruments, impressionistic passages, and even a medieval dance.

The score was performed by the Marina Del Rey Symphony, live to film in Chace Park in 2019, witnessed by some 2000 attendees. For this release, Safan conducted the Mile End Symphony, featuring vocalist Sonia Kazarova.