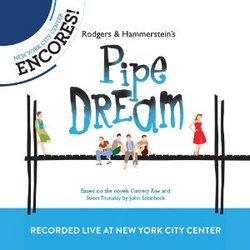 Outcasts yearning for a better life populate the bordellos and flophouses of a 1950s California seaside town in Rodgers and Hammerstein's Pipe Dream, based on the novels Cannery Row and Sweet Thursday by John Steinbeck. At the heart of the story is the unlikely romance between Doc, a marine biologist, and Suzy, a vagrant who has recently taken up residence at a local brothel.

This 1955 Broadway musical rarity had not been seen or heard in a full orchestral production in New York City until it was brought back to life by New York City Center's Encores! series in March 2012.

Bringing the score gloriously to life, as captured on the Live album, is the Encores! cast which includes Will Chase as Doc (All Kinds of People, All at Once You Love Her, The Man I Used to Be), Laura Osnes as Suzy (Everybody's Got a Home But Me, The Next Time It Happens), Leslie Uggams as Fauna (Sweet Thursday), Tom Wopat as Mac (A Lopsided Bus, The Party We're Going To Have Tomorrow Night) and Stephen Wallem as Hazel (Thinkin').