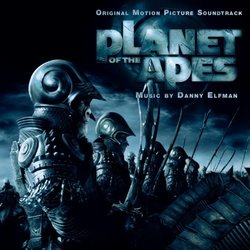 Planet of the Apes

Review: Planet of the Apes

It's hard to top a classic.  Especially one that stars Charlton Heston, and contains some classic lines of dialogue.  Loosely based on the Pierre Boulle novel, Planet of the Apes was a provocative and thoughtful film exploring the ideas of racism and the horrors of nuclear devastation.  A phenomenal success, it spawned four sequels, a television show, and even an animated series.  Now, 33-years later, 20th Century Fox brings us a new Planet of the Apes - this time as envisioned by director Tim Burton.  The new film tells the tale of an astronaut in the not-too-distant future, Leo Davidson (Mark Wahlberg), arrives on an alien planet via an electromagnetic disturbance that he investigated after his chimpanzee trainee vanished into it.  Here on this world, the rulers are militaristic apes, and the domesticated "pets" are humans.  A human-rights activist ape Ari (Helena Bonham Carter) allies herself with Davidson as they try to return Davidson home while trying to evade capture from General Thade (Tim Roth).

The film is wrought with story problems, and at times it seemed to be trying too hard to be irreverent.  The writers seemed to have so little original material to work with that they even resort to using multiple "classic" lines from the original film.  Charlton Heston even has a cameo (this time as an ape), and manages to blurt a classic line out, much to the audiences amusement and glee.  But it detracts from the overall film, which was really about racism and class differences.  Nonetheless, the film boats impressive makeup effects by Rick Baker, and a rather tense percussive score by Burton collaborator Danny Elfman.

Elfman's score really does well to underscore the film.  The "Main Titles" accompany a Stargate-reminiscent opening title sequence, and involve a lot of percussion with a recurring ascending three-note motif.  It's very heavy on the drums, and it pulls you in.  "Deep Space Launch" is a more dramatic cue underscoring the sequence where Davidson sets out to retrieve his chimp.  More orchestral and less percussive, the score takes on a bit of dissonance as Davidson enters the electromagnetic storm.  Upon his crash-landing on the alien planet, he's immediately thrown into "The Hunt", where humans are being rounded up by the apes, for sale as slaves or pets.  An incredibly elaborate and percussive cue, there is a brass motif that recurs throughout the film adding to the tension and excitement of the chase - it reminds me a bit of the train sequence from his score to Mission: Impossible.  "Branding the Herd" is a short cue that contains some "classic" Elfman elements, most notably the "oom-pah" bass line that seems to pay indirect homage to his earlier Burton scores.

Of course not all of the score is action, and softer cues like "The Dirty Deed", "Escape From Ape City / The Legend" and "Old Flames" lay it on softly, with more woodwinds providing some emotional backing.  "Preparing For Battle" is a rousing and exciting cue underscoring the start of the rebellion against the apes.  "The Battle Begins" is almost five minutes of action, and stands out as a quality Elfman action cue.  Without ruining the film (if I haven't already), "The Return" underscores the climax of the film and the "twist" at the end.  I say "twist" because it wasn't really a twist - just another concept.  The music starts quietly, as things are wrapped up, but then build into a large and dramatic cue.  It ends on a rather ominous note, and you will know why when you see the film.  (That should be no surprise!)

The album is wrapped up with the end credits music, "Main Title Deconstruction" - a sparser yet more pronounced rendition of the "Main Titles" cue.  Added on (for mere amusement, it seems) is Paul Oakenfold's "heralded" "Rule The Planet Remix".  Utilizing dialogue from the film and score snippets, Oakenfeld has made a rather droll remix that one can "dance to".  It seems like someone has been spending a little too much time with ProTools.  I think you can just end the CD after the "Main Title Deconstruction"!

This is a pretty decent score by Elfman.  I wouldn't consider it to be his best, but I thought some of the more dramatic percussive cues ("Main Titles", "The Hunt", "Preparing For Battle") stood out as "must listen" tracks.  The main problem I had with the score was the lack of major thematic material (beyond the occasional motifs), and at times it just felt like a whole lot of sound and fury, signifying…. you know. In the end, the score served the film perfectly, but I felt the film failed to satisfy me - and I didn't have overly high expectations going in!  Still, any avid Elfman fan will want to pick this one up; for everyone else, get it if you like the film.