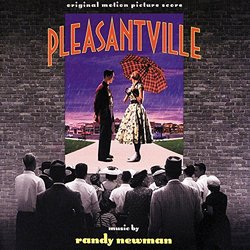 I was once again driving along when I decided to give Pleasantville a listen. I was driving with my friend, Herb, when I hit play on the disc player. The opening track began, and he commented to me, "Gee, your parents must be proud of you!"

relates the story of two people, a brother and sister, who get transported to a 1950’s "Father Knows Best"-esque television show. The show is actually called, "Pleasantville". While the two are in Pleasantville, their actions more and more rapidly change the landscape of the place as the local residents learn of new concepts such as color, and sex. The opening theme (which my friend referred to) is actually the theme to the television show into which they’ve been relocated.

That theme is the only track of its kind on the soundtrack. The rest of the score actually tells the story. Newman has been nominated for three Academy Awards this year, one for A Bug’s Life in the Musical or Comedy category, one for Best Song for Babe: Pig in the City, and this score in the Dramatic category.

David Koran wrote a good piece about Randy Newman recently, and he mentioned that this score has some bits that will most likely be used in trailers for years to come. I could not agree more. This is especially true of a recurrent theme that appears with the most force in track 5. Randy Newman is known to have a talent for comedic scoring and comedic songs, dating back to "Mr. President, Have Pity on the Working Man" a few decades ago. With this score, he goes romantic.

Pleasantville is a voyage of discovery, and the music reflects this quite well most of the time. Parts of the score are reminiscent of Edward Scissorhands with some magical sections featuring enjoyable harp work. The primary strength of this score is the main theme, and a few of its varied incarnations. Unfortunately, the majority of the score’s strength stays there. There is some variation during which Newman becomes more playful with the music, but the score stays with those three elements: playful, romantic, and the Pleasantville theme.

This is a nice score with a number of astounding sections, but taken as a whole, I do not believe it merits an Oscar. An Oscar nomination is well deserved, but holistically, it just does not have it. When I think of the wording, "achievement in scoring", I think of something like The Thin Red Line which was a true symphonic breakthrough, in my humble opinion. This is a gorgeous score, and more enjoyable to listen to in some ways then The Thin Red Line; I just wish it was more consistent throughout.