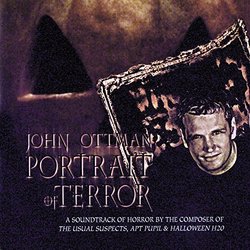 It's pretty obvious, just by looking at the track listing and the liner notes, that John Ottman's Portrait of Terror is really his score to Halloween: H20. Some might remember that a chunk of Ottman's score was removed in lieu of the pre-existing temp track, which was supplemented by composer Marco Beltrami. As such, Miramax decided that they couldn't release an official score CD, because they would be unable to accurately reflect the film if they just released Ottman's work, and Beltrami's work had more or less already been released. However, Ottman's self-imposed policy of issuing everything he's done on CD meant that there would have to be either a Promo CD, or a workaround. Portrait of Terror is the workaround – with no direct reference to Halloween: H20, and a small mention of Miramax at the bottom, Ottman got his wish.

The music itself is very unique. Right off the bat you can tell that you are in for a treat when a full orchestral version of John Carpenter's Halloween theme begins playing – and the bass is amazing. The room actually shook! Ottman wrote a new theme for Laurie this time around and adeptly iterates it into Carpenter's theme. There is a lot of atmosphere and orchestral effects throughout the score, which is appropriate being that it is a horror score. Some moments that stand out: a homage to Psycho in "Advice"; Deborah Lurie's creepy vocalizations in "Rest Stop"; the action sections of "Road Trip", and of course the final climactic notes on the CD.

Spattered throughout the score are references to Carpenter's themes, and at no time does it seem disrespectful of Carpenter's work. The only true dilemma is that it is near to impossible to judge how this music worked in the final film: whatever wasn't cut out was most likely moved around so that nothing really was heard where it was supposed to be heard. Another conflict that I personally had was that I always felt that Carpenter's Halloween theme worked because of its simplicity – the eerie synthesizers and piano bits added to the suspense. Ottman's full orchestral renderings are very cool to listen to, but something in the back of my head wishes it was just a synthesizer and a piano.