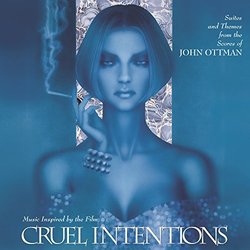 Performed by
The Pussy Trio

Cruel Intentions is one of a handful of recent films whose score was effective, intriguing, and original - and nobody ever heard it. John Ottman's score for Cruel Intentions was a sad case of a fine piece of work being put through the ringer by a production team that really couldn't communicate what they wanted, and were only decisive enough to know when they heard what they didn't want. The fate of the "rejected" score is a sad one - it tends to remain in the collection of the composer, never to be heard by fans and score enthusiasts (unless it's re-used in later films, as with Goldsmith's Alien Nation). Usually, we can only speculate at how a rejected score might have sounded.

Enter Varese Sarabande records, whose track record for releasing unused film scores is second to none. Beginning with that most fabled of rejected scores, Alex North's 2001, the label has been involved with the release of several unheard scores by major film composers, and now John Ottman can be added to this list.

That is fortunate for us, as listeners. While perhaps it's nothing at all groundbreaking or life altering, Cruel Intentions is a solid, well-crafted score that showcases Ottman at his most reserved. It's a thematic score, with the main theme heard in the first cue reprised in nearly every subsequent cue. It's also a very small score, with only a handful of performers under the baton of Maestro Damon Intrabartolo. It has a sort of new-age Baroque feel to it—it's mostly electronic drum beats, string trio, and a haunting female voice (this was before that was the "in" thing, mind you!).

The rest of this disc is quite a treat - a sort of John Ottman's "Greatest Hits" album, with a few notable exceptions. Sadly, legal matters prevented Ottman's break-through score, The Usual Suspects, from appearing on this album. That gripe aside, every one of these suites (with exception of Lake Placid, which never really appealed to me much) is quite a joy. Though Suspects saw him breaking it big, I firmly believe that Incognito has yet to be surpassed as Ottman's magnum opus, and this album presents us with the three most exhilarating and altogether wonderful cues from that score (with a new transfer, at that!).

Snow White: A Tale of Terror is nice, but a lot easier to miss than the rest of these suites. Apt Pupil is a bravura overture, complete with choral effects. Another highlight of the album is Ottman's take on John Carpenter's Halloween theme in the opening title from Halloween H20. Even the purist would have trouble not being won over by this affectionate and aggressive tribute to one of the greatest horror themes of all time.

Finally, to the other unreleased portions of the album. The cue from The Cable Guy was previously only available on the song compilation album, and there with a much more shoddy mix. Elfman-ish though it is, it's got charm. The same can be said of "Fantasy Island," Ottman's Emmy-nominated score to the pilot of that ill-fated series. All in all, this album is a wonderful showcase of an under-appreciated talent (as evident from the Cruel Intentions score being rejected in the first place!). If nothing else, take this album as a sampling of Incognito, which is a modern classic.