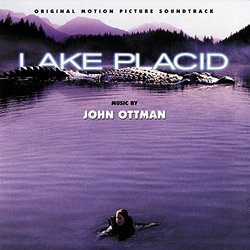 John Ottman\'s suspense and thriller sound is given an interesting and quirky twist for Lake Placid, the crocodile attack film by David E. Kelley that doesn\'t take itself seriously (he is the creator of "Ally McBeal", remember). Ottman\'s music does, generally, take itself seriously, and to good effect. The score turned out to be along the lines of Goldsmith action music with some patriotic cues thrown into the mix, such as in "Udder Preparations" where the nice, serene theme we heard as the camera soared over the mountain lake in the main title gets a more intense statement on the trumpets. The general feel of the score, however, remains in Ottman\'s thriller ballpark and he pulls off the score nicely.

There is a bit of quirkiness to the score too, though, namely for Oliver Platt\'s character, Hector. There is also a love theme for Kelly and Jack (Bridget Fonda and Bill Pullman), which plays through some of the slower moments of the album. The music picks up about halfway through the album with some more dramatic statements of the main theme ("Reluctant Passengers", "Here He Comes") but generally falls into more of a thriller genre until "Trapping Crocs Resolution" where the action kicks back in. I should also mention that the album features some quite enjoyable track titles. The score closes with another nice statement of the theme in "The Lake Hitching a Ride".  Fans of Ottman\'s work will enjoy the adventurous twist to some of his usual suspenseful sounds and the score, like many others of his, showcases his creativity as a composer.