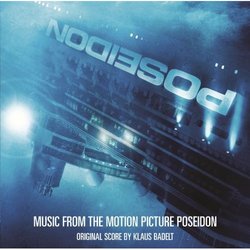 Klaus Badelt has had a few good scores and quite a few disappointments; sadly, Poseidon falls under the latter. Scores like The Time Machine and The Promise showcase his abilities as a composer and the "Main Title" for Poseidon has a great adventure feel, with a brass theme soaring over heavy percussion. For some reason, this style of instrumentation has been used often for ships, as in Pirates of the Caribbean: Curse of the Black Pearl and Master and Commander: The Far Side of the World. Poseidon, while it by far has the shortest title of these, it also has a very generic, clichéd score. Following the main title, most of the music on the short album could accompany any modern action film; the score has very little character or unique elements.

Badelt\'s theme does make a few brief reprises in "Fire Dive" and "Escape", but it is not enough to make the score much better. Granted, Badelt didn\'t have a great film to work with, but take Trevor Rabin\'s work on Deep Blue Sea, a similar category film, both in the genre and the final result. Rabin had a number of themes and varied instrumentation styles for different aspects of the film, like underwater scenes, action sequences, etc. Poseidon has very little, except the short main title. Portions of the score were recorded with a large orchestra at the Todd AO scoring stage in Los Angeles. However, if I had not known that, I would not have thought there was an orchestra at all: the mixing of the music makes everything sound synthetic, and the electronic percussion and sound effects drown out the orchestra.

Surprisingly, the few songs that accompany the score are not bad. Fergie has a great voice and it is nice to hear her independent from Black Eyed Peas. She sang during the New Year\'s Eve party in the film; "Won\'t Let You Fall" is a ballad and "Bailamos" (not an Enrique cover) is an upbeat song with a Latin feel. Fortunately, iTunes offers single track purchases, so these songs and perhaps the "Main Title" are available without the rest of the cues.