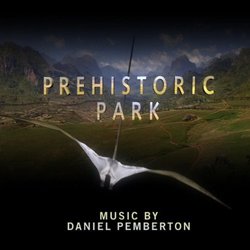 Dinosaur films have not lacked in the film score arena, with popular examples being John Williams\' classic work for Jurassic Park and The Lost World and James Newton Howard\'s Dinosaur. On the other hand, the new CGI-dominated prehistoric biology documentaries that have been popping up have had... well, let\'s say a smaller budget. The new British series, Prehistoric Park, features a fully orchestral score by composer Daniel Pemberton (The Movies video game). While not as thematically powerful as Williams\' or Howard\'s scores, this sort of production is hardly comparable.

Pemberton has a main theme for Prehistoric Park, but it is subtle and most audible in the opening and closing cues. "Opening" and "Entering the Park" introduce this theme in the brass, backed by percussion. A Lydian motif runs along behind it at various tempos, much slower in the latter cue. The theme is more developed and drawn out in the second track as well. One aspect of the score I appreciate is that the theme makes a number of appearances throughout the score, sometimes in a similar arrangement to the opening statement, such as "The Time Portal", "Magical Flight", and "I Can See For Miles", and other times in briefer, less recognizable versions, as in "Mammoth Dawn", "Beautiful Day" and "Spotting the Dinosaurs". Other cues are heavy on the percussion without the theme: "Cave Bear Chase", "T-Rex Showdown" and "Insect Territory".

A number of the cues on the album, which is just under an hour long, are accompaniment music to underscore scenes in the documentary and drag the album down a bit. However, a couple of standout tracks keep the music interesting. "Saving the World" begins with a moving string and percussion line that builds into a brass fanfare. The music then stops before exploding into a brass-dominated statement of the theme backed by the full orchestra in a triumphant variation. "Meteor Strike" opens with pounding percussion, which stays consistent throughout the cue. Two thirds of the way through, however, the orchestra comes in with building chords as the percussion accelerates and pounds to a close. There is no theme here, but the change in style makes this cue stand out.

The final four cues on the album end the score on a high note. "Trouble Brewing" moves along with a string line and sets the stage for "The Great Escape". This climax cue uses new percussive sounds and a more frenetic orchestral style before suddenly bursting into a trumpet statement of the theme before descending back into the percussive din. "Returning to the Park" and "End Credits" do what the first two cues did and sum up the thematic material, again backed by the Lydian motif. This is an impressive score for a prehistoric CGI documentary and should be worth checking out, as should the documentary, if it ever reaches America.