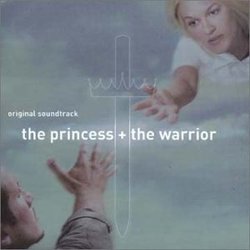 The Princess and The Warrior

Review: Princess and The Warrior, The

Does a movie centered on a woebegone "princess" in a psychiatric ward, and a "warrior" lost in his own depressed penetralia mentis share any similarities to its soundtrack?  Like Detritus, the themes in The Princess and the Warrior, as well as in the soundtrack, seem to lose focus as it progresses. While I was certainly enraptured by the movie's visual imagery, and cinematographic work I was slowly lulled into a disappointing ending where complex characters and storylines fall apart into nothing more than two peoples quest for salvation and release from their own misguided existences. Albeit we see an interesting web of similarity between two seemingly disparate characters, the movie ends with an epiphany that caught me asking, "Was it worth the time I spent in the theatre to see these characters figure themselves out?"

In the soundtrack, a listener will similarly find complex and deeply haunting themes. However, with the amalgam of voice upon music, the focus seems lost. For whatever reason, after the fourth track, I begun to realize that the singing really distracts from the lush themes these composers have rendered. Thankfully, there are a few good electronic tracks at the end that carry the themes without distracting vocals. These last four tracks almost make up for the few "in betweens" I wanted to rush right over.

Now on to the important details. First, the soundtrack yields a pretty clear mental representation of the movie to which it follows. I find it almost dreamlike at parts. To that effect, it is a valiant effort and worthy of merit. The songwriting team (Pale 3) is actually composed of Johnny Klimek, Reinhold Heil and the director of the film Tom Tykwer. You may remember them from the score to Run Lola Run. It appears that Pale 3 conceptualized the score, and then dished out songs to various cast members and lyricists to add their own lyrics. This would explain how the themes are so omnipresent. The vocalists on this CD are actually pretty good in their own right. The theme song, "You Can't Find Peace" features Skin, from Skunk Anasise, and the song "Why Don't You Fly" (my favorite of the vocal pieces) features Franka Potente, the star of the film.

In summation, I would recommend this CD for the fullness of the themes. If you enjoyed the movie, by all means you will find the CD enjoyable. If you are a fan of electronic / ambient work and can tolerate some vocals that might distract from your relaxed state, I would still recommend you try a listen. However, if you are looking for a purely symphonic piece this is a battle you, The Princess and the Warrior will lose. Try a little Chopin.