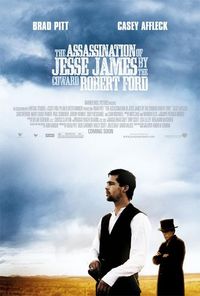 The Assassination of Jesse James by the Coward Robert Ford

Review: Assassination of Jesse James by the Coward Robert Ford, The

On April 3, 1882, the outlaw Jesse James was shot in the back of the head and killed by Robert Ford. How the circumstances for that situation arose, and what those involved were thinking was explored in the 1983 novel, The Assassination of Jesse James by the Coward Robert Ford, written by Ron Hansen. Now a new film based on the novel, written and directed by Andrew Dominik (Chopper) stars Brad Pitt as Jesse James and Casey Affleck as Robert Ford, and takes a very slow introspective look at the people and situations that led to the death of Jesse James. Produced by Ridley Scott, the film introduces us to Jesse James (Pitt) and his brother Frank (Sam Shepard) as they are preparing to rob a train with the help of some locals, including the Ford brothers: Robert (Affleck) and Charley (Sam Rockwell). Robert has been a huge fan of Jesse James for most of his young life, having read stories about him as a kid. As the two men work together, we start to learn more about the complex internal conflicts raging within each of them, prompting Jesse to ask of Robert at one point: \"Do you want to be like me, or do you want to be me?\" We all know how it ends, so the film works more as a character study than an unfolding narrative.

The biggest strength of the film is, without a doubt, Roger Deakins\' spectacular cinematography. Shot primarily around Alberta, Canada, the film ranges from a washed out look that evokes 1880\'s era photography, to vibrant shots full of deep colors and striking sunsets. The dialogue spoken in the film felt genuine, and character exploration created three-dimensional figures, most notably in the surprisingly effective performances by Affleck and Rockwell. Unfortunately with a very slow pace that evokes the work of Terrence Malick, the film moves from sequence to sequence, bridged by a narration that feels tacked on. Reportedly the original cut of the film (which was scheduled for release in September 2006) was over three hours long and featured more lingering introspection, but they cut it down to \"only\" 2 hours and 40 minutes - certainly better, but still way too long.

The music was done by Nick Cave, of The Bad Seeds, with Warren Ellis. Together these two had composed the music to the stark Australian western film, The Proposition, and the string-based approach to the score stands out quite well in this film. Contrary to how the marketing is promoting the film, it\'s not a Western, nor is it an action film. Maybe if they had condensed it down to a 30-minute short film, focusing on the story, would it have been more accurate. But given the snail\'s pace that the film takes, combined with long takes and a feeling of intellectuals pontificating without telling the story, it\'s the type of film you need to be prepared for, otherwise your expectations will not be realized. If you\'re a fan of Malick\'s films, and enjoy watching a character study with gorgeous cinematography, then this film is for you - and definitely worth seeing on the big screen. But if you\'re looking for an action Western, then 3:10 to Yuma will probably be more up your alley.