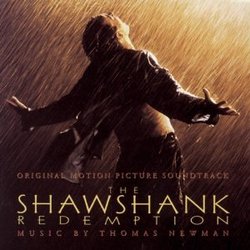 The Shawshank Redemption is a story about a man named Andy Dufresne (played by Tim Robbins), who is wrongfully convicted of murdering his wife, and is therefore sent to Shawshank Prison to serve two life sentences back to back. While he is there, he must deal with those that despise him, brutal guards, and a corrupt warden. This is dark, horrible stuff, and Thomas Newman knows it. For the majority of the album, Newman has composed some very dark music that fully expresses how prison may be like, especially if you put yourself in a situation like Andy is. The second track, "Shawshank Prison (Stoic Theme)," is where the main theme of the prison emerges. The track begins with depressing cellos followed by strong and emotional violin. The track is powerful, while being very saddening at the same time. Much of the CD is like this: sad, down, and dank. There are a few songs from the film scattered throughout, but for the most part, The Shawshank Redemption is a CD that you listen to when you are feeling low—really low. This music, while being of that nature, is artfully done, and well made, yet a little hard to stomach at times. With that said, the music goes along with the dreariness and power of the film, and is effective in what it brings to the table.

The redemption for the listeners comes at the end of the CD. Beginning with track 18, "And That Right Soon," the music starts to look up, as Andy, it has been found, has escaped from prison. The violins soar here, as the warden, to his surprise, has found out the news. In "Compass And Guns," we return, slightly, to the world of prison, as Red (played by Morgan Freeman), fresh out of prison, reminisces of the days he spent with Andy. This track is not as depressing as the rest of the CD is, due to the hopefulness and reality that it conveys. The real treat of this CD is when track 20, "So Was Red," begins. Red decides to go and join Andy where he is living now. The cue is beautiful. The clarinets play with gentleness and meekness, while the rest of the orchestra gives off a sense of awe and amazement. The track ends with a soft piano, as the film fades into a view of a beach near the Pacific Ocean where Andy is. A crash of cymbals explodes, as we go into the next cue, "End Titles," which is arguably the best track on the entire CD. Red and Andy are reunited, but in freedom. Newman writes a powerful and bold piece of score for this. He pulls out all of the emotional stops for this cue. It is a truly magnificent and majestically written and performed piece of music. So moving is this track, that it almost moves me to tears when I hear it. It is indeed one of the better cues that Thomas Newman has written.

Some believe this score is a bit too depressing. Others think that it is best left in the context of the film. I believe that this score stands well on its own, and tells a very coherent story by itself. Thomas Newman has created an unforgettable work with this composition. He deserved, and received, the Academy Award Nomination for this score, and in my opinion, deserves the Oscar now. Hopefully, someday soon, the Academy will smile upon Newman, and award him the gold statue that he deserves. But for now, through this score and many others, Newman has proven that he is a capable and adept composer. The Shawshank Redemption is one of his best examples of this, and can be considered no less than a masterpiece.