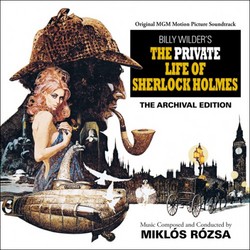 The Private Life of Sherlock Holmes - The Archival Edition

For music, Wilder turned to his friend and past collaborator R¾zsa, asking him to adapt his Violin Concerto, Op. 24, for the film. R¾zsa obliged, augmenting the concert work with a number of evocative new themes for the picture. The music for Holmes anticipates the elegant but autumnal mood of later scores, while simultaneously combining the compassion and wisdom of experience with the wit, charm and joie de vivre of youth.

The soundtrack album of The Private Life of Sherlock Holmes was never issued on LP. R¾zsaphiles were thus understandably ecstatic when, in 2007, James Fitzpatrick reconstructed and recorded the entire score for Tadlow Music. That superb recording remains an essential touchstone in the R¾zsa discography. Still, fans have continued to hope for a release of the original tracks.

Quartet Records spent almost three years searching for the best possible sources, but the original masters are, unfortunately, forever lost. (A tech note included in the booklet explains the lengthy and frustrating process in greater detail.) We have used three different monaural music-only stems from the MGM vaults for this release—none of which was in ideal condition. Engineer Jose Luis Crespo has minimized the changes in level necessitated by the addition of dialogue and effects and meticulously blended the best sources for each cue. The resulting CD, in spite of its less-than-ideal sound, preserves the composer's own irreplaceable interpretation, bringing this marvelous music back to life more than 40 years after it was written.

All of Mikl¾s R¾zsa's music is worth preserving. This premiere "archival edition" of the original tracks of The Private Life of Sherlock Holmes, extraordinarily performed by the Royal Philharmonic Orchestra under the composer's baton, was a labor of love for everyone involved. The immortal music of R¾zsa deserves nothing less. The lavishly designed package includes a 28-page booklet with liner notes and track-by-track analysis by Frank K. DeWald.