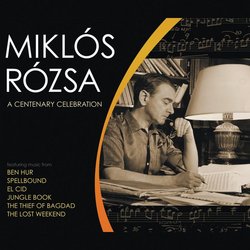 April 18, 2007 marks the 100th anniversary of the birth of legendary composer Miklós Rózsa. To celebrate one of the truly great film composers we have put together this special CD set compiling recordings that have been unavailable, in some cases, for decades.

Rózsa won three Academy Awards (Spellbound, Ben Hur, A Double Life) and is revered as one of the master composers of the century. His piece Theme, Variations and Finale was on the program (along with works by Schumann and Strauss) that historic night in 1943 when Leonard Bernstein stepped in at the last minute for Bruno Walter and shot to overnight stardom. Rózsa composed his Violin Concerto for none other than Jascha Heifetz!

Rózsa's film music is simply some of the greatest and most memorable ever composed. Grand, sweeping melodies and breathtakingly complex orchestrations helped create a genuine sense of awe in his music that, in the annals of film, may be second to none. Rózsa could write epic like no one else!

We present over three hours of his music in honor of the maestro's birthday. So many of his classics are here—Ben Hur, Spellbound, Jungle Book, Julius Caesar, The Lost Weekend, The Thief of Bagdad—and are now available at this special price.

Just in time for what may be the most important birthday celebration this year comes Miklós Rózsa: A Centenary Celebration!