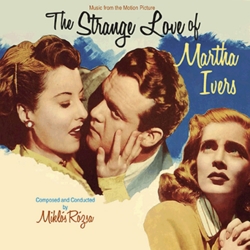 The Strange Love of Martha Ivers

The Strange Love of Martha Ivers is a terrific picture with wonderful dialogue, elegant direction and great performances—it's noir, it's melodrama, and the whole film crackles with electricity. And perfectly capturing every mood, every character and every situation is the classic score by Miklós Rózsa.

The music for The Strange Love of Martha Ivers is almost a second cousin to Double Indemnity and The Lost Weekend, filled with the incredible Rózsa sound of that era. No one did this kind of thing better than Rózsa—he seemed to have a real affinity for these darker tales. The main title is everything a classic main title should be: it draws you in right from those great Rózsa-esque opening chords, introduces its beautiful main theme and then segues directly into the first cue for the young runaways. From there, Rózsa's music weaves its magic, perfectly capturing the film's moods, situations and characters as they travel their dark roads.

The surviving music from Martha Ivers was taken from a set of incredible-sounding acetates preserved in the Paramount vaults. It's almost fifty minutes of prime Rózsa and it's nearly all of the score, with only a handful of missing cues. Only two tracks had material that was beyond repair—one of those tracks was only twenty-four seconds long and the material contained therein was well represented elsewhere. For the other track, through careful editing, we were able to save ninety percent of it and, again, the material that wasn't salvageable was represented elsewhere in the other cues.

Miklós Rózsa is in the pantheon of greats, and it's really gratifying to bring one of his classic noir scores to CD.

The Strange Love of Martha Ivers is limited to 1000 copies only.