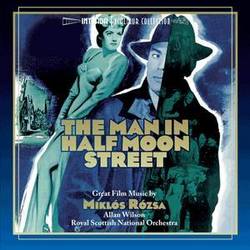 The Man in Half Moon Street

This new Intrada Excalibur CD offers premiere recordings of music from two films which are virtually unknown today (Jacare and The Man in Half Moon Street), the first modern recording of music from The Strange Love of Martha Ivers, a suite from Miklos Rózsa's early WWII drama Sahara and a composer-created suite from Valley of the Kings (commissioned by Intrada producer Douglass Fake) which would have been included on a fourth Polydor collection if plans for it had ever materialized.

Allan Wilson conducts the Royal Scottish National Orchestra in a faithful, spirited concert of some of Rozsa's finest work produced by Kevin Kaska and executive producer Paul Talkington. A generous 20+ minute suite of the obscure noir film The Man in Half Moon Street headlines.