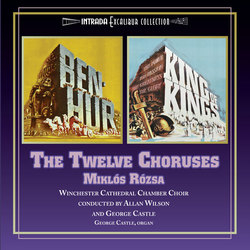 Intrada announces the latest in its Excalibur Collection—a brand new recording of Miklos Rozsa's The Twelve Choruses. The film choruses on this disc—derived from Ben-Hur (1959) and King of Kings (1961) were published by Robbins Music, the publishing division of M-G-M, shortly after the films were released. Accessible and relatively easy to perform, they were intended primarily for church and school choirs.

To expand their appeal and usefulness, most were published in two arrangements—mixed choir and women's choir—with piano or organ accompaniment. Although the composer did not necessarily intend all 12 of these pieces to be performed as a group, they were recorded as such by Rózsa's friend and associate Tony Thomas in the early 1980s and Christopher Palmer arranged some of them in a "Christmas Sequence" recorded by the Royal Philharmonic Orchestra in 1992.

This Intrada release is their first complete recording in over three decades.